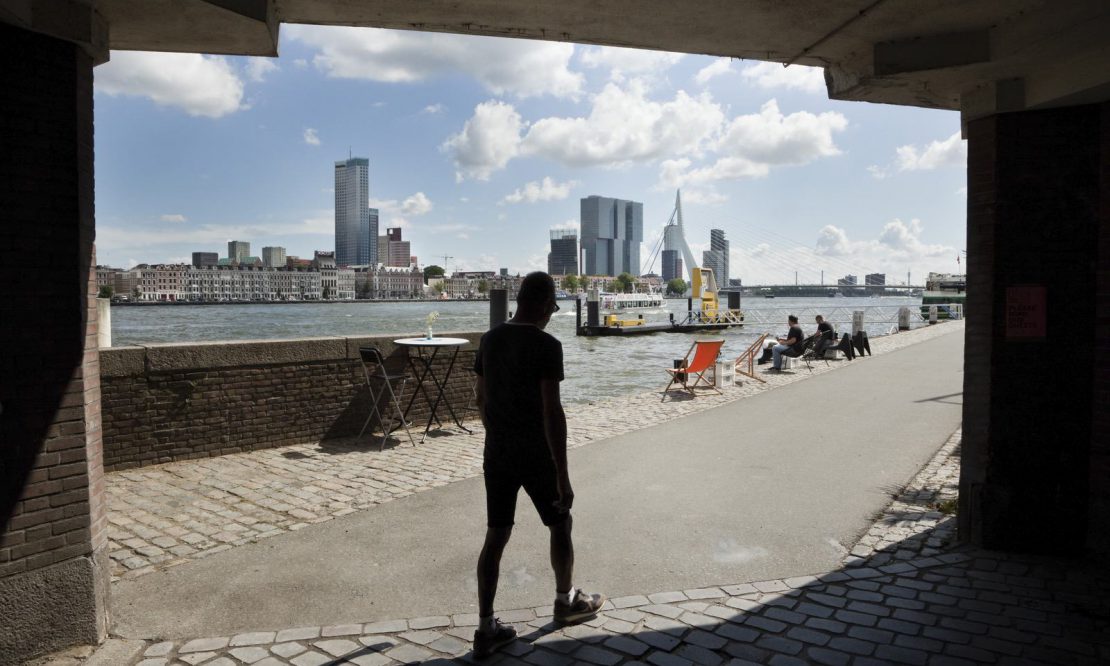 In 1972, the recently formed Interfaculteit Bedrijfskunde IIB – the precursor to RSM – moved into its modern, glass-and-concrete, light-filled new building. It was everything that young, ambitious management students might expect of the Netherland’s leading business school. There was only one problem; the new building lacked character. Conviviality. It lacked, to be frank, a bar.

Which is where the trailblazing Jaap de Smit, the man “who got things done” at RSM, came in. “De Smit was a ‘shoot first, ask questions later’ kind of guy,” says historian Ronald van der Heijden (MScBA, 2002). “He thought, ‘Damn it, we’re going to have a bar’. He designed it, furnished it, worked out heating, lighting and water – he got it off the ground.” Because it was based inside the faculty building itself, with wood-panelled walls, comfortable seating and, of course, drinks, the students called it Lecture Hall Nine – and later would recall how it embodied RSM’s can-do spirit.

Setting up a new graduate school of management was a bold move in the 1970s. Among some of the documents unearthed by Van der Heijden are a back-of-the-envelope, handwritten analysis of the international competition, from IMEDE (now IMD) to London Business School. The school was intended to offer something new: a hybrid venture which saw Delft University of Technology deliver technical education while Erasmus University Rotterdam would see to students’ economic know-how.

Leading companies, from Philips to ABN AMRO, backed the new course – and the first class of 30 students were automatically hired and paid as research assistants. “It seems unbelievable now,” says Joop Ruijgrok (Postkandidaats Bedrijfskunde, 1972), who was among the first intake of 30 ‘salaried’ students accepted from the hundreds of graduates who applied.

Ruijgrok remembers a mix of classes – from the hands-on ‘blue collar’ skills delivered by Delft to more traditional staples of business education, from marketing to strategy. Archive photos show a room full of young men – and one woman (Saskia Stuiveling who went on to lead the Algemene Rekenkamer, the Netherlands Court of Audit) – all beards, sideburns and long-collared shirts. During their degree, students travelled to the US, spending time at Harvard and Michigan business schools.

But for Ruijgrok, it was the class’s trip to Romania that stands out. “We went ostensibly to study the oil sector and compare it to the Netherlands. But the real driving force of the trip was a desire for adventure.” He remembers being shadowed by leather jacket-clad security police – “We knew they’d been through our hotel rooms” – and a fellow student being locked up for the night for a traffic offence. “Being part of a first group was an experience. Nothing was set in stone. You felt you were creating something quite new.”

RSM was never an “obedient” school, agrees Berend Wierenga, who was appointed Professor of Marketing in 1982 and became one of the first deans, helping to set up the research arm of the school, the Erasmus Research Institute of Management. “We were the first truly interdisciplinary business school,” he says. “Students were pioneering and ambitious. There was great interest in our course – students didn’t just go on to become economists and lawyers, they went into general management. And they were really sought after.”

The school’s independent spirit, he says, came from a feeling it didn’t ‘belong’ to either partner university. Returning to Rotterdam in 1984, the school didn’t sit easily within traditional academia. “EUR was an established institution; we were almost seen as competitors. We came with an entrepreneurial attitude – we were ahead in our field, very innovative, very international. We were the first school on campus to teach classes completely in English.”

And the school still shows the same willingness to stay ahead, says Van der Heijden. It’s 20 years since he attended, and he’s still proud. “The school is now teaching about AI and data science. An adaptive curriculum is like the golden thread running through the decades.”

Even in the early days, RSM was ahead of the game – students were given their own PCs long before computers appeared on campuses around the world. “RSM was never one of these schools with marble pillars,” says van der Heijden.

As one of the first students to have a PC, Marieke Van Putten (MBA, 1990) remembers an era of floppy discs and business attire during her time at RSM. Today, she is a senior innovation manager in the Dutch government’s Ministry of the Interior and Kingdom Relations.

Van Putten had already studied in the US and, while most teachers at RSM were fluent in English, one dogged professor of accounting, who spoke no English, learned all his English spoken lectures off by heart. “We couldn’t understand a word he was saying.” She worked alongside students from Indonesia, from India and Singapore, but it was American student Philip who made the greatest impression. “A man who wore shorts throughout our harsh climate – I was impressed. He lived in his own world.”

Desiree Moeskops’ (MScBA, 1995) career after RSM has led her to Asia, where she works in sustainability, but she says that during her time, environmental issues weren’t prominent on the curriculum. “We learned a little about CSR, but didn’t question the economic model – the Kyoto Protocol came long after we graduated. We had no clue that pollution would cause such massive problems.

“Environmentalists then were like rebels – greasy hair, unwashed, smelling of cabbage – it wasn’t cool to be green.” But what she learned, she says, proved invaluable. “We learned not to panic when faced with a huge, intractable problem. We learned to diagnose it, break it down and then approach the smaller problems.”

It’s the professors themselves who made the greatest impression upon Erik Steijger (EMBA, 2008). “They were impressive, very direct, they made us consider the bigger picture. To this day I remember the advice of a marketing professor when it came to business plans, who told us to always bear in mind the ‘Three Cs: competition, customer and company. ‘Anyone,’ he’d say, ‘who doesn’t keep those in mind deserves to be shot in the neck.’ It was thrilling at the time.”

Steijger made things challenging during his executive degree – he moved house and got a promotion. “I had a demanding job, but I’d arrive on a Friday evening for dinner and a weekend of learning, and I got so much energy back from my fellow students.”

Tight deadlines, a heavy workload and friends from across the world are what Romanian World Bank official Cosmin Buteica (MScBA, 2012) recalls from his time at RSM. “One professor greeted us with: ‘Welcome to the pressure cooker’, and that summed it up. It was intense, but we were competitive and that motivated us.”

It was also an international education, with an exchange semester in Chile and study trips to the Middle East and China. As ever, the extracurricular stays in mind too – from sandboarding on the Dubai dunes to a karaoke night in a Shanghai tower. It was in Rotterdam that he learned to ride a bike and found a love of playing squash. “But my greatest personal development came from understanding what diversity and inclusion really means. I learned lifelong lessons.”

Peruvian student Daniel Vargas Fernandez (MBA, 2014) scored highly, though not without some personal exposure. Desperate to impress Gail Whiteman, Professor of Sustainability Management and Climate Change, with his final assignment, he compiled a photo exhibition of Kralingse Bos – the wooded parkland on the edge of the city. “In the picture I stood naked in the middle of the forest to show the vulnerability of the human being – controversial, but I got the highest grade.”

Vargas Fernandez divides his life into ‘before and after’ his time at RSM. “When you choose an MBA, you’re not only choosing a business school. You choose the city and country, the kind of classmates you are going to have, the lifestyle – and I couldn’t have been happier with my choice.”

While the facilities have improved beyond recognition, the startup ethos of RSM is a constant, says Van der Heijden. RSM has achieved a level of brand recognition that its founders could never have imagined. And with some 40,000 alumni – and counting – it’s time to record the legacy, and look to the future, he says. “If you can understand where you have come from, you can see where you are going.”

Learn about our history and celebrate with exclusive online events